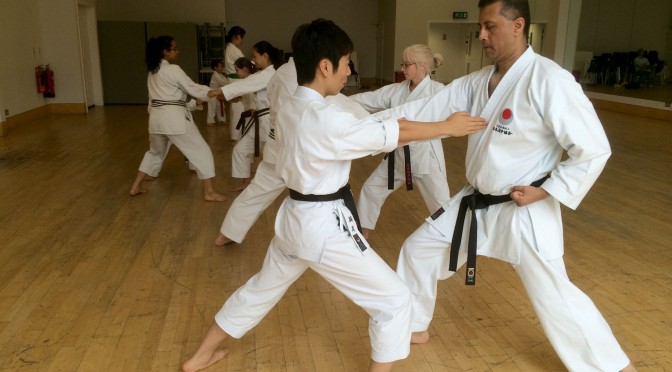 For the past three years, midway through the school summer holiday, Shiranamikai has run a five-day training camp. As well as breaking up the long school holiday, the aim is to show a different side of karate to that which we would normally have time for during regular sessions; to learn new katas and the application of techniques.

A wardrobe/brain malfunction had me looking less than formal on arrival for the first day, raising quite a few eyebrows as a result. Although some karate styles often practise without their tops on, Shotokan is not one of them. So instead, my new t-shirt received a harsh but satisfying Christening.

This year, with a higher proportion of brown and black belts than on previous camps, we had tougher basics and kumite drills leading up to senior katas: Empi, Jion, Gankaku, Kanku Dai, Kanku Sho and Gojushiho Sho. We’ll continue to practise these katas when time allows during our regular classes this year.

Just to reiterate what I said during the training though: it’s nice to know lots of different katas and good to practise them as it will undoubtably help your development. But it is essential that you focus primarily on one kata at a time; that being your own personal favourite or the one prescribed for your next grading level.

Well done to everybody who trained over the full week but especially those who still attended their regular classes on Tuesday and Wednesday evening.

As in previous years, after the Friday morning session, we all trundled off to enjoy a delicious sushi lunch, topped off by mochi ice cream!

Please put 3rd-7th August 2015 into your diary for next year’s Summer Training Camp!