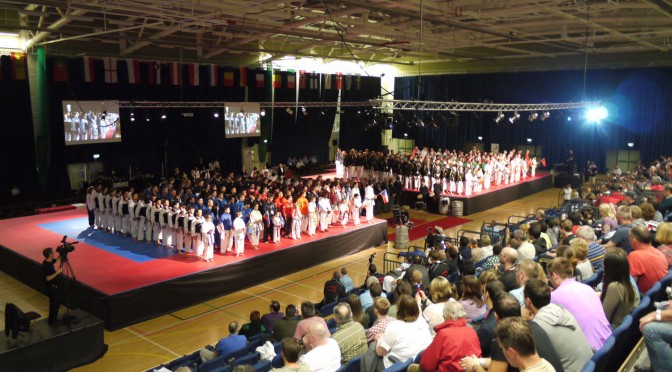 With sword fighting, drumming and magic tricks on the programme, it might well have been the script for a Takeshi Kitano film.

You would also have been forgiven for thinking that the competition had taken place in France as they had by far, the largest supporter! But the reality was that this was in Crawley, Sussex. England was playing host to the 2011 JKA European Championship.

Jörgen Bura, JKA Europe Technical Director delivered the opening message and initiated a one minute silence out of respect for those affected by the earthquake in east Japan.

Then the event was underway.

Elimination rounds for individual kata were first, followed by team kata, individual kumite and team kumite. After a break for stage assembly, all the competitors entered the arena while a live drumming performance took place. We then experienced a demonstration of medieval sword and stave fighting with Robin Hood and Shakespeare characterisations, before getting back on track with the finals.

There were some exciting performances. Of particular note was the male cadet team kumite where some lightening quick scoring by Serbia helped to secure first place. A member of the Norweigan team showed great spirit and technique during his kumite matches and went on to take gold. The England female cadet team performed a sharp Unsu, missing out on gold by a mere 0.1 point!

It was great to see the JKA England squad competing amongst the best in Europe and with competitors evenly matched in so many face-offs, a number of the bouts could have gone either way. Although the largest contingent, Germany, clearly dominated the results tables, JKA England have proved its high standards on the world stage, finishing joint 3rd place with Italy in the medals table overall – out of the 21 nations who took part.

If you didn’t make it to the event, there is a DVD in production which should be ready to buy within the next couple of weeks (we’ll post an update once it is released). With performances of all the Heian katas and Tekki Shodan, Bassai Dai, Kanku Dai, Jion and Empi, plus a variety of kata being performed as choices for the finals, it might be a useful reference aid. The kumite should also prove exciting!

The next international karate event is the JKA Junior European Championship to be held on 23rd-25th May 2011 in the Netherlands. Then three months later, the 2011 JKA World Championship (12th Funakoshi Gichin Cup) will be held on 18th-21st August in Thailand.