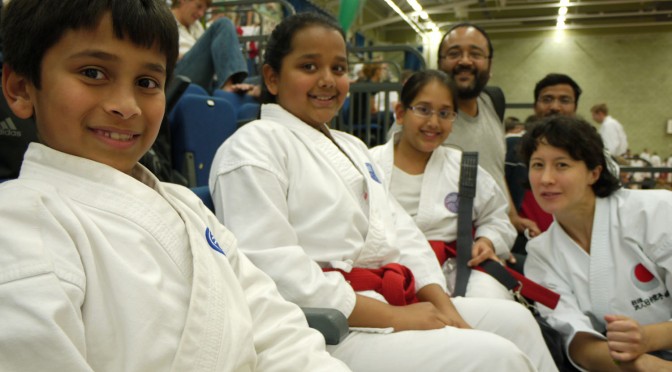 They say things happen in threes. One week ago I had a puncture and ended up buying a new set of tyres. On the eve of the competition, I got a call from a stressed parent who needed a lift because they had a flat tyre. Then, no sooner than we had arrived in Crawley, I received a text message from another student who had a blowout en route and wasn’t going to make it!

Still, the rest of us who got there early had plenty of time to check registrations and relax before the start. First up was Dharvi for kata, one of the youngest in a large category. This was a close call in an even match but she went out to a higher grade.

Shivani was pitted against a much bigger girl for kumite who went on to take gold. Although under pressure defending first, she recovered well to put in a good performance. A hesitation towards the end of an otherwise good Heian Nidan counted against Parth in another large category. Anthony went out to the same yellow belt medalist in both kata and kumite. But he showed long stances and looked strong.

Sasha got to the semi final of kata but was just 0.1 point behind the finalists to place 5th – the same situation as last year! In kumite, she went out to the gold medal winner. I missed out on a place in the kata semi-finals against a stronger opponent and was in the loo when my kumite category was called. With 580 entries to get through, there was no waiting for latecomers. Still, if you’ve got to go, you’ve got to go. The kids’ categories were very large. There could be as much as six years age difference between the youngest and oldest kata competitors which is a big jump for children. Also, for those first to be eliminated, one and a half hours is a long time to be sat on the floor waiting for it to finish.

The event itself ran very smoothly overall. There were seven areas, each with a JKA England senior and a full contingent of judges, referees and timekeepers. This was a big improvement over the last two years. With no lunch break or finalists’ parade and Ohta Sensei presenting the medals after each category, everything kept moving.

We didn’t stay until the end, it finished a little after 8 o’clock. By this time I had already eaten dinner and was tucking into some ice cream and a cup of tea. So no medals, but everybody kept smiling which was great. Sasha and I are very proud of those who took part and are extremely grateful to Suzanne and Sheila who gave up their Saturday in order to help out. Let’s keep up the momentum for the next club grading which will take place on Tuesday 9th August.

The next association event is a training course in Walton on Thames on 17th July which everybody should try to attend.

See you at the next lesson!