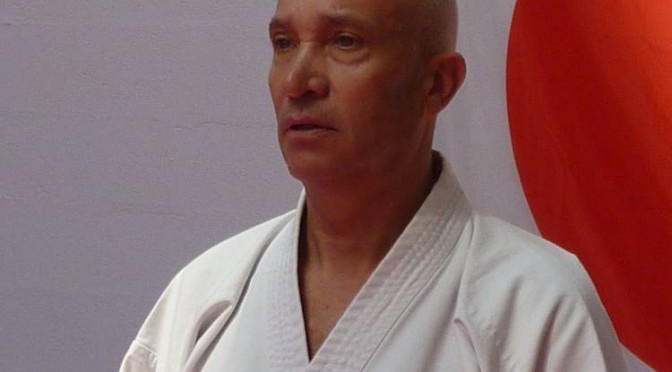 Sensei Lautier advised our group of more than a hundred dan grades that we would be doing “just five basic moves – easy”, but his wry smile suggested this wasn’t the full story. Sure enough, Sensei had thoughtfully choreographed five sequences combining front, side and back stance with multi-directional turns; first accompanied by hand techniques, then with the addition of kicks.

I think it would be fair to say that most of us found this session to be a challenge. However Sensei Lautier was patient and in between sets, gathered us around for a recap and additional explanation. But he also took these opportunities to make the task more difficult each time! With so many other people moving and turning around you, it’s easy to become distracted, then end up copying people in your periphery instead of persevering on your own. So Sensei had each row of students start the combination with a different leg forward.

We rounded off Lautier Sensei’s session by practising Jion, with all those intending to grade lined up along the front row for Sensei to scrutinise.

After a short break, Lautier and Ohta Sensei swapped groups. Ohta Sensei had our group working through kumite drills: the attacker (from uchi uke, back stance) shifting their weight forwards into front stance, attacking kizami tsuki, gyaku tsuki; the defender shifting their weight rearwards into back stance and defending age uke, soto uke (then countering gyaku tsuki, front stance to repeat the cycle). Another exercise used mae geri as the attack with the blocker shifting sideways (with a cover block) to avoid its path and counter-attacking with kekomi, gyaku tsuki.

Ohta Sensei’s method of introducing a kata often starts with basics and kumite combinations inspired by the movements in that kata. And in this case the exercises we had been working on were preparation for Nijushiho. It’s always impressive to see Sensei ingeniously break down a kata then build it back up bit by bit. He then treated us to his own performance of Nijushiho, explaining key points along the way.

To end the course, we each chose from Empi, Jion, Nijushiho and Meikyo, forming groups to work on our preferred choice.

This was the last JKA England course of 2011 but there is already a full schedule of events planned for next year with opportunities to train with Ohta Sensei and other world class instructors.