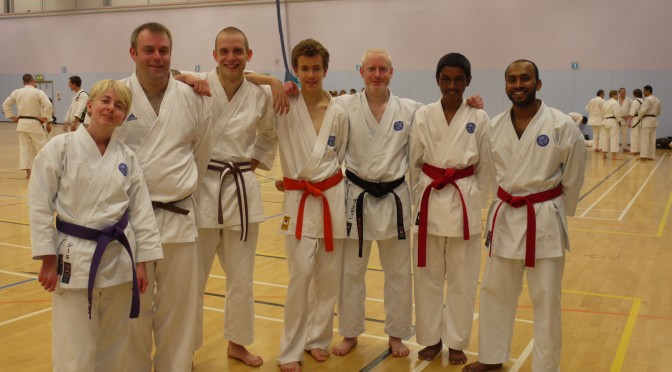 According to Wikipedia, Walton on Thames was used as the location for a number of Monty Python sketches filmed during the 1970s. I’d like to think that this might have included the “Self Defence Against Fresh Fruit” sketch, in which John Cleese advises a group of martial arts students on how to deal with unorthodox attacks.

Rolling forward to the year 2010 and the 24th of October, the combination of fruit and martial arts could again be found in Walton on Thames, specifically at the JKA All Grades Course held at the Elmbridge Excel Leisure Complex. However, on this occasion the bananas and dried mango slices were strictly for snack use only. After all, when you are exerting yourself with an intensive session of kihon, kata and kumite, you need all the energy you can get.

The 1st hour’s worth of training was led by Ohta Sensei and other JKA England instructors assisted with the teaching as the afternoon progressed. The acoustic in the room made it a little difficult to hear all the instructions, but as usual it was possible to learn a lot from Sensei’s fluid demonstration of how to use the hips, ankles and body weight efficiently. For 9th to 4th Kyu students, there was a chance to practise the kata and sparring sequences that will be needed for the forthcoming JKA England Kyu Grades Championship. A feature of the training for those from 3rd to 1st Kyu was a chance to practise katas Empi and Jion, providing a refreshing change from Bassai Dai.

We had an enjoyable day training together at this course. Well done to all who attended!

P.S. As for the topic of ‘Self Defence Against Fruit’, those who are interested to learn more can take part in a virtual lesson via this link.