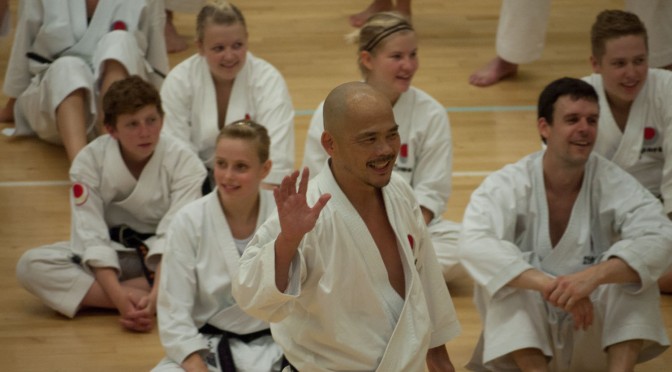 Izumiya Sensei led us through a session on how to check that techniques follow the correct path. Generally, the correct course for a technique involves the foot or fist travelling the shortest possible distance, from the start point to the goal, yet with the maximum amount of power delivered to the target. For a series of exercises aimed at helping us check and tidy up our techniques, Sensei used a few props – including a small towel, a karate belt and a broom handle.

Imamura Sensei provided us with some pointers on posture, including an impromptu demonstration of the meaning of ‘shime’ (which comes from the verb ‘shimeru’ meaning ‘to close’ or ‘to squeeze’). This involved Sensei energetically scrambling up the student who had posed the question and standing on his upper thighs whilst he was stood in kiba dachi.

Another highlight was seeing Izumiya Sensei demonstrating a number of possible applications for the kata Unsu. The takedowns drew gasps from all those watching.

As usual, this course was aimed at all levels. Different grades were split into groups and there was something for everyone, from beginner through to advanced dan grades. Brown belts had a particularly useful session on Sunday which saw them work through their grading syllabus with Ohta Sensei.

Check the events page for details of the next special course.