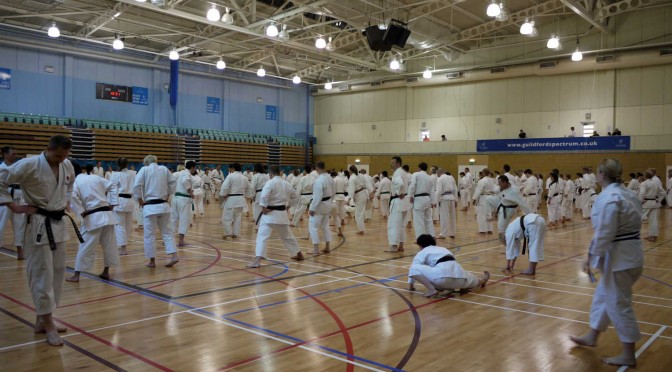 Unlike previous international courses where we have studied several of the kata, the emphasis this time was more on basics and combinations which then flowed into kumite drills. Of the kata which we did practise, the application of the moves was carefully explained and demonstrated.

Each day’s training was split into three lessons. The first hour consisted of high repetitions of physically demanding basics. The second and third sessions featured either basic technique, kumite or kata. Bassai Dai, Jion and Empi were the main focus for brown/black belts. Nidan also covered Hangetsu and Gankaku; Sandan and above studied Sochin with Osaka Sensei.

For our first day, Osaka Sensei led us through sets of basic techniques which were great exercise for both mind and body. Stepping with gyaku zuki in different directions, importance was placed on when to pivot on the heel or ball of the foot and use of the inner thighs to accompany hip rotation. Osaka sensei also reminded us of the importance of using all parts of the body in harmony, avoiding the mistake of ‘disjointed technique’. The latter point was reiterated often throughout the course.

Sawada Sensei demonstrated applying pressure when facing an opponent during kumite – continually pushing oneself forwards until the other person felt forced to launch an attack, thereby creating an opening in their own defences. Sensei had us practise lots of combinations with different partners, the final one using gedan barai with a step-in to take down the opponent. Great fun.

Tanaka Sensei gave the impression of being rather displeased by the black belts. After informing us on day two of the course that he had been “secretly” watching each of us practising Jion on the previous day (cue the miming of binoculars… finger wagging and head shaking), Sensei made us do Heian Shodan – “Back to the beginning!” But while he was firm and often scolding of the senior grades, kyu grades spoke of how inspiring Tanaka Sensei was and how much they had enjoyed his lessons.

We enjoyed an upbeat lesson with Inokoshi Sensei taking us through the kata Enpi – demonstrating correct technique while highlighting common mistakes to be avoided.
He also took the first lesson of the last day for basics and kumite exercises. It was already clear by now why Inokoshi Sensei is a world kumite champion. But if there was any doubt at this point, there certainly wasn’t afterwards. With his deep stances, fast, clean, committed attacks and slick footwork, we could all but try to keep up with him.

If you didn’t attend this time and haven’t been to one of these courses before, you are missing a great training opportunity which is impossible to recreate at club level.

Three hours training per day for four days might seem a little excessive for some people and it is quite a big commitment – karate does require dedication. The first hour of basics every day was exhausting for all of us, but there is great camaraderie to be had in getting through that challenge together. Hundreds of students, senior grades and instructors alike, pushing themselves past what they thought was the limit of their ability.

There is a vital lesson here for our karate training, which will help us face the challenges of life itself:
No matter how hard it gets or how tired we feel, we must never give up.