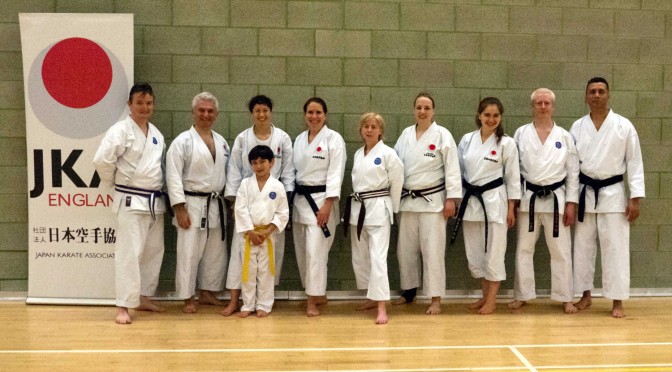 Enroute to the K2, we hit heavy traffic because of someone’s caravan having swung across the motorway, so we had to take a detour along the A-roads and through some villages. We arrived at the sports centre just after the warm up and bowed straight in. While it was frustrating to arrive a bit late, at least the detour had allowed us to spot a few foodie pubs where we would be able to refuel between training sessions!

The four day course was, as always, carefully planned. Content from each day complimented the other sessions. Participants were split into groups according to grade with the course instructors rotating between the groups. For the sandan and above group, the first part of day one included repetitions of punches, mae geri and combinations of the two. These seem to be trademark basics of Tsuyama Sensei, who taught at the famous Takushoku University club for four decades. But as we all know, ‘basics’ doesn’t necessarily mean ‘simple’ or ‘easy’. What we learned from these exercises regarding points to pay attention to was echoed over the next three days.

Both Senior Sensei; Tsuyama and Osaka were very specific about the quality of movement that more experienced karateka should be aiming for. For instance, each had us finishing a sequence with choku tsuki. We had to make sure we used the action of our ankle pushing the heel down onto the floor to direct the energy upwards through our legs, to our hips, body, arms and ultimately fists. Rather than simply dropping or falling into a stance both instructors wanted precise control, correct transfer of energy and the feeling of keeping the Jiku ashi and core active throughout the sequences.

Kata was reserved mainly for the second part of each day but the first session for sandan and above on Friday covered Bassai Dai and Jion with Osaka Sensei. We followed this in the second session with Hirayama Sensei’s Bassai Sho, a kata which has taken her to the final of the All Japan Championship and the Funakoshi World Cup on numerous occasions.

On Saturday, we studied Chinte and Gojushiho Sho with Ohta Sensei by request of those who were due to take a dan grading. Time was spent working through Chinte with detailed explanations and lots of bunkai partner work. Sensei highlighted the use of a variety of different circular movements in Chinte, before demonstrating this beautiful kata to us, with incredible control and smoothness.

Both Osaka Sensei and Hirayama Sensei are well known for being excellent exponents of the kata Sochin. With this in mind, I was hopeful, that we would get to study it at some point, and was not to be disappointed. Hirayama Sensei led us dynamically through Sochin on Sunday and we finished off by having two halves of the room divide and perform the kata in turn. What exactly Hirayama Sensei said afterwards is lightly disputed between Sasha and me, who were on opposing sides. Suffice to say we both think that our own side’s performance was preferred!

Sochin is characterised by its deep-rooted fudo dachi stance, powerful arm techniques and the contrast between slow and fast. The challenge is very much in maintaining smooth, controlled movements, keeping the heel down, back straight and rotating the hips.

Finally on the last day, we were back with Osaka Sensei for Gojushiho Dai, some wrong turns (er… by me) and a very achey left leg (me again).

There were some exciting kumite matches during the International Team Friendly Tournament on Saturday afternoon. Teams consisted of two female and three male competitors. The results were 1st place: England Team A, 2nd place: Norway, 3rd place: England Team B. But it wasn’t just the competitors who had their work cut out because Osaka Sensei and Hirayama Sensei were scrutinising the judges and referees as part of their JKA World Federation qualification test! Well done to all, I think!

There was a very good turn out from Shiranamikai over these four days (fifteen of us in all!) which was great to see. However, a special “well done!” goes to Sheila, Beth, Yassin and John who along with Sasha and myself, attended every possible day, receiving a special certificate at the end. I’m told that in total, there were around five hundred attendees over the four day period!

This year, there was even a buffet and party at the designated event hotel: Arora. Thankfully speeches were few and short but the highlights included a presentation to Mrs Chieko Buck and an impromptu (Norweigan) song by Geir Larson, Chief Instructor of Norway! A disco followed, where everybody had the opportunity to let their hair down and where Yassin could be found, right in the middle, for the majority of the evening!

This spring’s special course was a great event – everybody who I have spoken to since has said the same. I for one am very much looking forward to the next one.