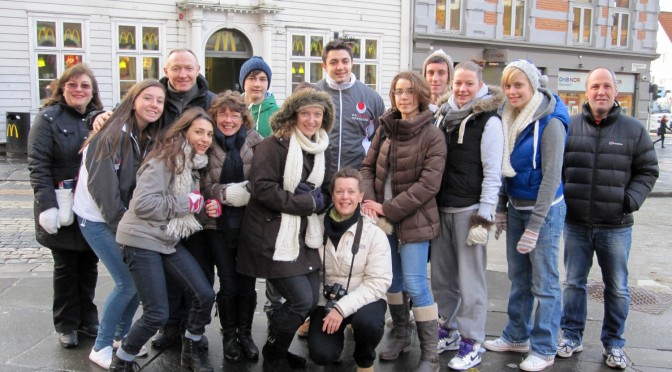 In November 2011, JKA Norway held a special 4-day Gasshuku in celebration of a successful 25 years. Larsen Sensei 7th Dan and Ohta Sensei 7th Dan were in attendance, as were a line-up of no less than 11 instructors from the JKA Headquarters dojo in Tokyo, Japan. To see this many Honbu instructors together at an event outside of Japan is probably unprecedented! The course was attended by karateka from over 17 nations and on each day of the training there were over 600 participants.

Memorable sessions included studying Sochin with Taniyama Sensei and Nemoto Sensei. We paid particular attention to smooth transitions from stance to stance, effective use of the supporting leg and also on making precise, quick Shuto Uke.

A kumite session with Ogata Sensei provided some useful drilling on the use of yori ashi. The exercises we practised were simple yet the concentration needed to apply the techniques with correct distancing, timing and control created an intense atmosphere. On ending his session, Ogata Sensei reminded us that care and respect for others was one of the most important responsibilities for a karateka to uphold. He explained that while the techniques we develop through karate training can potentially be used to devastating effect, there was nothing uglier than hurting a training partner through a lack of consideration. There was far more beauty, said Ogata Sensei, in having the mental and physical skill to perfectly control what would otherwise be a lethal technique. It’s the same idea in our everyday interactions outside the dojo – where we should take care that our actions and words do not cause offence or hurt to others.

Naka Sensei’s ability to create whip-like power through fluid use of his body was awe inspiring. We practised Tekki Sandan and with our minds occupied on remembering the sequence itself, many of us struggled to get anywhere close to Naka Sensei’s quality of movement. The lack of repetition and sequencing in this kata, coupled with the inclusion of some familiar movements that also appear in Tekki Shodan, make for a mind-boggling combination!

Imura Sensei worked through a number of exercises to help us develop the strength and flexibility needed for Jitte. Some of these were very hard work yet great fun. One challenging exercise involved working with a partner. With one person maintaining a strong and stable kiba dachi, the other would suspend themselves in an almost upside-down position by wrapping their legs around their partner’s waist. Then, while hanging on for dear life, the suspended partner had to perform sit-ups!

On the penultimate day of the course there was a team kumite match between Japan, England, Norway and Germany. England were represented by five JKA England squad members: George, Chris, Twanda, Rachel and Jana. There was a fantastic atmosphere, particularly with the host country cheering on their national team and with strong spirit being shown by all the competitors and their supporters. Japan, fielding a team of recent and current All Japan and World Championship medallists, were the eventual winners. Watching the Japanese fighters, I was impressed to see Okuie Sensei’s direct and postitive lines of attack and by Shiina Sensei’s intuitive sense of timing. But the outcome of the match was by no means a foregone conclusion, with some strong performances put in by the European teams too.

On the last day of the course, we were treated to a rare display of free fighting by Japanese instructors. While this is incorporated into their daily instructor training, it is unusual for non-Honbu instructors to be allowed to observe it. The exchanges were fluid and skilful, and it was interesting to see the instructors experimenting with holds and takedowns.

Bergen is a beautiful city, and aside from training, it was fun to be able to explore it with friends. We took a ride on the Fløibanen cable car to take in some wonderful views of the city and ate some mouth-wateringly fresh seafood.

Congratulations to JKA Norway on its Jubilee Anniversary!