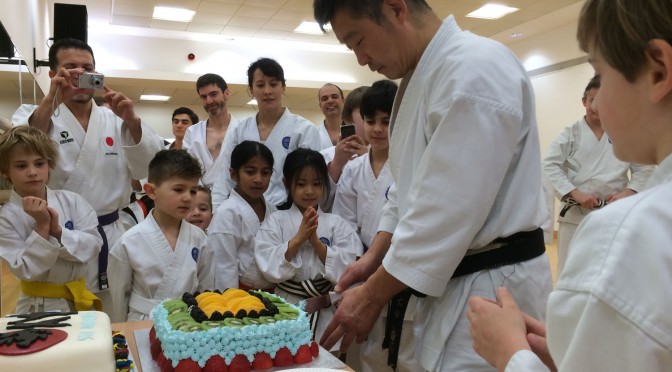 There was a great turnout at the Swiss Cottage dojo for Shiranamikai’s 5-year anniversary. As well as our own club members, we were pleased to welcome two of our friends from JKA Scotland, Senseis Bert and Martin, who were down South for the weekend and with Ohta Sensei taking the class, it all made for a great atmosphere!

After an enthusiastic warm-up from Darius, it was down to basics and partner combinations which formed a precursor to the kata Gankaku (meaning crane on a rock). This kata shows well, the long stances particular to Shotokan karate but the complexity lies in maintaining one’s composure while changing height and direction.

Time really flew by in this session and as we neared the end, the dojo floor cleared and Ohta Sensei demonstrated Gankaku in its entirety, which was superb to observe. Finally, brown and black belts performed the kata one last time before the class was over.

Alaa was primed with two of his delicious handmade cakes and Delia had also prepared crates of bite-sized (read: mouth-filling) cupcakes – all washed down with a soft drink courtesy of Sheila! We spent the next couple of hours in a local Italian restaurant. Unsurprisingly, nobody ordered dessert.

Five years after the club’s inception, it is incredibly rewarding to see how Shiranamikai students and the club as a whole have developed. This is down to everybody who comes to train at our dojos and contributes to the great atmosphere.