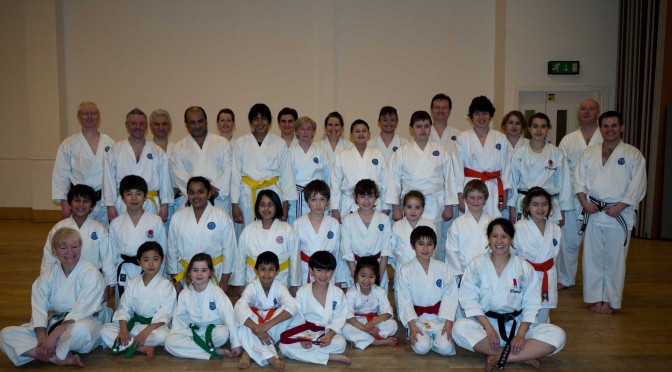 From time to time we like to invite guest instructors to the club. Experiencing the different teaching styles and body dynamics of other instructors helps to broaden your karate horizons. And to have a fresh pair of eyes scrutinising your karate can serve as an incentive to make you work that little bit harder.

Sensei Sue Waughman 4th Dan JKA is an instructor at London’s Budokai dojo and trained at Takushoku University under Tsuyama Sensei in Japan during the 1980s. As such she is no stranger to pressurised training environments in which students are pushed to give their best.
Sensei delivered the lesson with lots of passion. She demanded complete concentration and encouraged us to start our movements explosively. “Usain Bolt!” she cried out, requiring us to emulate one of the greatest 100 metre sprinters of all time.

As we stood balanced on one leg during practise for mae-geri, Sensei encouraged the juniors to challenge themselves. “Anybody…” she said, dropping the knee of the kicking leg lower than the ideal preparation position and letting her ankle loosen. Then in contrast, keeping the leg tightly tucked and the ankle flexed correctly, “…A world champion!”. Sensei also directed a lot of pressure towards our seniors, driving them to perform kumite over and over again until she was satisfied.

One thing that you cannot help but have noticed is Sensei Sue’s all or nothing approach – for her, training comes first and anything less than 100% will not do. We train to develop truly powerful and focused techniques, such that one decisive technique is all that would be required if a physical confrontation became unavoidable.
The somewhat intimidating expression ‘ikken hissatsu’ – meaning to ‘annihalate with one blow’ is a reference to this concept and you will hear karate practitioners refer to it from time to time. But take care to understand what it really means, and how it can be applied without contradicting our commitment to self-control and development of character. The concept of ‘technique for maximum effectiveness’ is secondary to the benefits that karate brings to the whole person.

Each of us would hope never, ever to be put in a position in which we would be seeking to achieve a literal ‘ikken hissatsu’. But the philosophical equivalent of the same concept is to make every single action count, delivering each one with focus and to the best of your ability. It is this idea that we wanted you to experience for yourselves.

Thanks to all those who supported this event – we hope it served as something a little different from the usual scented candles and rose petals on Valentines night!