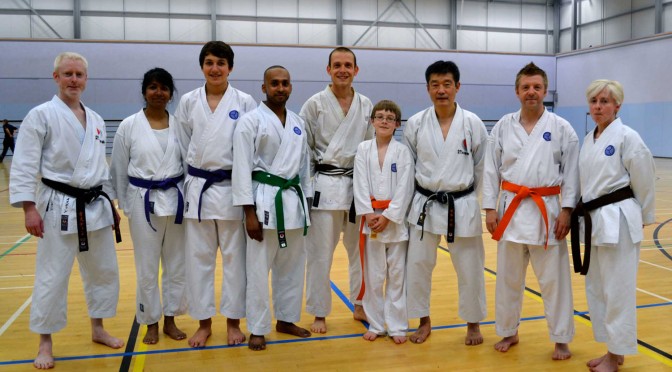 The July course at Walton on Thames was billed simply as the “All Grades Course” and I was expecting the usual mix of kihon, kata and kumite. As it turned out, the training was 100% kata. Great – my favourite! And a useful way for Shiranamikai students to polish their kata for the forthcoming summer grading.

What are kata, anyway? There’s a lot more to them than simply memorising a sequence. Firstly, their purpose is to set out a framework through which karateka can develop physically and learn the techniques of karate as well as how they can be applied. So much so that when you perform kata, you should build your understanding of the meaning of each technique and imagine you are fighting a series of opponents. Kata is also a form of performance art. As such, karateka should not only try to master the techniques, but should also use the kata as a vehicle for expression of their own emotions and personality. After in-depth study, the ideal is for your body to move effortlessly and efficiently, leaving you free to enjoy the dynamics of the movement.

But back to the course itself – which presented an opportunity to move bit by bit closer towards that ideal performance. At the start, Ohta Sensei outlined the kata that we would be studying. Brown belts would focus on Empi and Jion. Black belts could choose 2 kata for in-depth study out of Empi, Jion, Chinte and Gojushiho Sho. Grades from 9th to 4th Kyu would be focusing on Heian kata.

First up for me was Chinte. Ohta Sensei encouraged us to balance the apparent softness in this kata’s character with an assertive mentality. As I settled into fudo-dachi I caught a glimpse of Austin, Sheila, Will and the rest of the Jion group being put through their paces. It looked like a tough session!

Next was Gojushiho-Sho, a kata characterised by smooth, flowing defences in back stance, interspersed with sharp open handed attacks. We were reminded that this kata needs seemless transitions in order to maintain its momentum.

During the last part of the course, Ohta Sensei asked those intending to take Dan gradings this year to state which kata they were planning to perform for the exam. Then various stations were set up throughout the hall – each one focused on one of the choices. I joined the group performing Kanku Sho. Austin returned to Jion. Sheila and Will opted for Bassai Dai.

Meanwhile, Danny, Suzanne, Mo, David and Aidan systematically worked through all the Heian kata. In the breaks, it was great to see our group sweating profusely and reviewing what they had learnt. There was also a chance for me to sample the Shiranamikai haul of sugary snacks. I’d say the Rowntree’s Sour Pastilles have a slight edge over the Jelly Snakes.