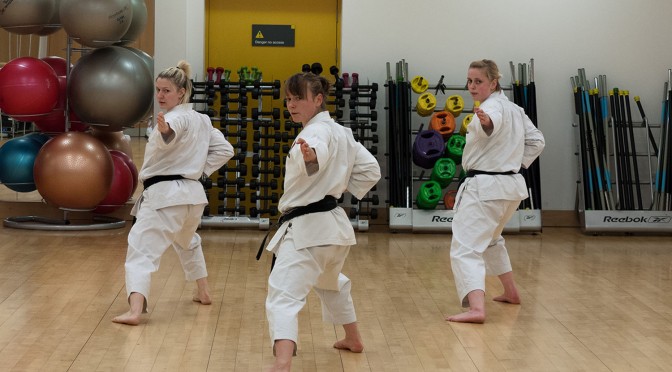 It was in September 2010 that teammates Roisin Campbell, Rachel O’Halloran and Jana Sersnova first visited Shiranamikai. Over the past two and a half years, they have sustained an excellent record in JKA international competition. Among their achievements are 2012 JKA European Ladies Team Kumite Champions, Silver Medallists for Ladies Team Kumite in the 12th Funakoshi Gichin World Cup and Bronze Medallists for Team Kata in the same event. And in her debut appearance at the most recent All Japan JKA Championship, Roisin performed superbly, achieving a hotly contested place in the kata final and an impressive 5th place overall.

We were also pleased to have Mama Jeni back (herself a former gold medalist in team kata as well as a qualified JKA referee) to give everybody a thorough warm-up and stretch.

We had an hour of basics, ippon kumite and a little bunkai from Kanku Sho (a dynamic kata featuring timing changes, escapes and evasive techniques) before running through the kata twice slowly. Then the Ladies Team showed us how it should be done!

By now, the lesson had run into extended time but with everybody keen to stay for more, we split the class for more kata. Starting from the top, Roisin looked after the Brown belts, Jana: Purple stripe; Rachel: Green & Purple; Jeni: Yellow; Sasha: Red; Me: Orange belts & Beginners. For many, this was the first opportunity to learn the kata for their next grade after the kyu grading we had held two weeks previously.

Each of the six groups had 15 minutes tuition from a black belt before being called up by section in front of the class. Roisin, Rachel and Jana were on hand to show each of Heian 1-4 and Tekki Shodan individually, and Bassai Dai as a team. This was a great way for everyone to experience how dynamic the Heian and Tekki kata can be, and how they really can be polished to another level by hard work and consistent effort.

Everybody worked very hard in this session – well done! And many thanks to our guests for taking the time to come to our club!