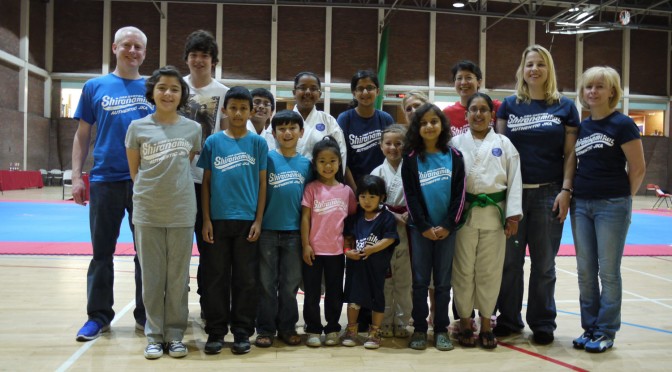 After a whole day cooped up in a stuffy sports centre in Slough, Shiranamikai karateka were keen to get back home. Our team put in a set of great performances across a range of categories and came away from this year’s Championship with  SEVEN medals! Well done to all.

First up for kata were the youngest juniors. All performed well on their first competition outing. Yassin put in a powerful and confident performance but after holding another strong competitor to a draw twice in the first round he was unlucky to lose the final decision in the tie-breaker. Anju’s accurate technique and super kiai saw her through to the final, where her Heian Nidan earned her the silver medal!

The older boys and girls also performed well in kata. In the 6th Kyu to 4th Kyu category Shivani got through to the final, where a solid Heian Sandan earned her silver. Parth achieved the bronze medal position in the Boys’ 3rd Kyu and above group, demonstrating nice hip rotation with Tekki Shodan.

In the ladies senior kata, Beth’s hesitation and Sasha’s minor stumble saw them both eliminated early on. In the men’s division, Austin went all the way to the semi finals, where he performed Jion to earn a place in the final four and earned bronze with a smoothly executed Gojushiho Sho.

Much, much later in the day the kumite events took place! Several of our juniors made it through the first round but it was Matthias who took bronze for a strong sanbon kumite (13-15 years). Lisa did well to earn a bronze medal for ladies kumite (9th to 6th Kyu), while Peter took bronze in the mens!

It was great to see everyone mixing and enjoying the day together, showing good spirit and trying their very best. We’ve all come away motivated and with ideas on how we can improve on our karate. Thanks to all the competitors and supporters for contributing to a great day!

Next year’s Championship will hopefully be held in slightly more salubrious surroundings with more seats and a nice cafe. We look forward to building on what we achieved this year.