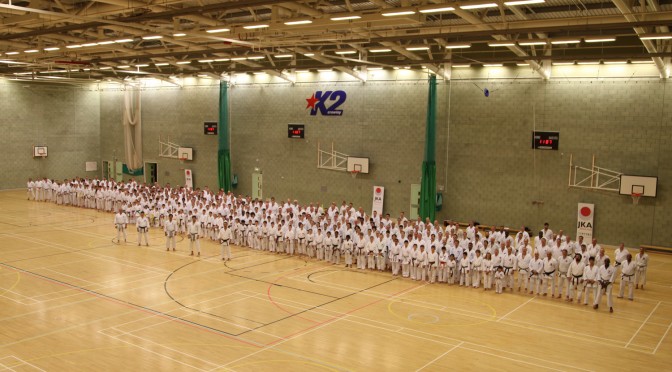 Everybody enjoyed this excellent JKA England spring gasshuku which delivered a great mix of form, energy and education!

Each instructor brought his own unique training methods but all four were distinctly JKA. Osaka Sensei broke kata into sections for repetition and allowed plenty of time to explain muscle engagement and to check body positions. Okuma Sensei brought strength and speed to kumite drills. He introduced a scientific approach by explaining body axis movement and correct breathing in order to harness one’s inner strength. Nagatomo Sensei’s friendly manner and encouraging feedback proved popular with many people. His off-balance/over-balance and take-down lesson was very interesting while his “now, eyes closed!” kumite left many people feeling on edge! Ohta Sensei did not disappoint either with his boundless energy and superb kumite lesson which used ideas from the kata Empi. The kicking drills incorporating ushiro mawashi geri were enjoyable too.

These international training camps are an invaluable way to learn and improve technique. Three hours goes by very quickly! It’s also a nice opportunity to get to know your fellow club members better and make new friends from neighbouring countries Norway and Germany or those farther afield like Israel and Canada!

The next international course will take place at the end of September with Ohta Sensei’s special guest instructors Shina Katsutoshi 7th Dan from the Tokyo Honbu and Sawada Kazuhiro 7th Dan from Belgium.

I look forward to seeing you there!