We had a fantastic, 2-hour karate training session at the weekend with The Japan Karate Association in England’s Chief Instructor, Ohta Yoshinobu Sensei.

When’s his next visit? Not soon enough!

All of our classes have been running live online since 24th March. We have a stable, interactive feed, with instructor-student interaction just as we would in our regular sessions.

Let’s not forget the importance of looking after one’s mental health in these challenging times. Enjoy the fresh air and sunshine of the beautiful spring weather to exercise, whilst maintaining a safe distance from others. And indoors, follow the sessions, watch the details, check the technique and practise safely.

Keep up to date

Feel free to reach out via the contact form. Email is still the best method of contact for club members and I will send session weblinks and updates using this method so make sure the club email address is added to your email whitelist, and Follow our Twitter and Facebook accounts @Shiranamikai

[Fully in line with official guidance at the time]

Shiranamikai instructor, Austin Biesty, talks with London-based TV correspondent Alexander Khabarov about the measures adopted by the karate club in the wake of the coronavirus pandemic.

With gyms, schools and halls closing because of concerns about virus transmission by touch and being in close proximity, we moved to hold a contactless class outside, thereby also ensuring good ventilation and distancing by remaining at least two meters apart.

One of the unique benefits of many Japanese martial arts is the ability to practise effectively without contact. Karate training comprises three core elements: Kihon (fundamentals), Kata (set patterns), and Kumite (partner work). Having already dropped the kumite aspect we were able to continue practise whilst adhering to official guidance.

In budo, the overwhelming aim is the development of oneself, and as such, by being able to continue practising alone but with direction, one places a much higher demand upon their own state of mind and physical form than they would do when facing an opponent directly.

Alexander, it was lovely to chat!

And how quickly things change! We had the pleasure of the next morning’s sun together which was to be our last lesson in person before moving all sessions online.

Shiranamikai Karate has been featured in ‪The Sunday Telegraph’s ‘keeping active’ pictorial. Students were pictured practising two meters apart and completely in line with guidance at the time. The caption reads…‬

‪With cafés and attractions shut, in Primrose Hill, London…a martial arts class takes place – making sure they keep their distance from each other‬.

Top session with our Association’s Chief Instructor, Ohta Sensei, this week. Kyu grades received special guidance on their katas while brown & black belts were kept busy working through an exhaustive set of kicking and kumite drills!

Congratulations to everyone on passing their grading!

Shiranamikai participated in the Shotokan Open Championship this weekend. This annual event, hosted by The Japan Karate Association in England, regularly comprises iro 350 entrants from across the UK and Europe. Well done to everybody who made the effort!
Our club’s results as follows…

Congratulations on the impressive performances, everyone, it’s a 15-medal haul for the club! But what really counts is trying your best, and being back in the dojo for the next training session 🤗

Shiranamikai members performed a karate display at the 2019 Japan Matsuri in London’s Trafalgar Square, the largest outdoor Japan-UK cultural event bringing together the best of music, food, dance and of course, martial arts!

We did our best to illustrate core elements of JKA Shotokan karate, demonstrating Kihon (fundamentals), Kata (set pattern sequences) and Kumite (partner work). We also saw a lighthearted interaction between one of our most experienced members and one of our most junior, with a little help from her friends!

Japan Matsuri 2019 also marked the official launch of the Japan-UK Season of Culture, celebrating the unique bond between our two island nations as Japan plays host to the Rugby Work Cup and the 2020 Olympics.

See you next time!

There was a great atmosphere during Ohta Sensei’s karate class at Shiranamikai this September with everybody trying their best and pushing themselves throughout his demanding kumite drills. Not a single brow was dry!

Congratulations to everybody who graded on achieving their next level!

We participated in Hyper Japan at Olympia London in Kensington.

From the J-Culture stage we could hear something big going down on the other side of Olympia but it wasn’t until reviewing the video footage that we realised that during our Ippon kumite, tsugaru shamisen rock artists Kuni-Ken, were performing their own ‘Ippon’ on the main stage! Of course, we had to get in touch :-D

Thanks to everyone at Hyper Japan! See you next time!

Music by KUNI-KEN
Available on Spotify, iTunes store etc. Check them out! 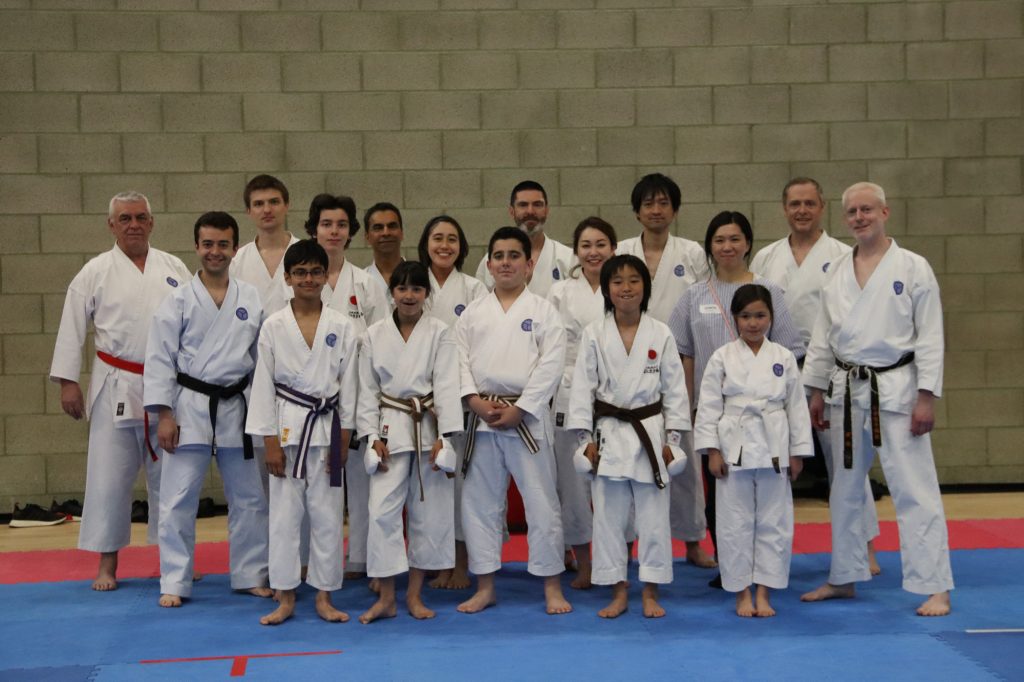 ©2009-2021. All content copyright of Shiranamikai unless otherwise stated. Do not reproduce.
error: