All of our classes have been running live online since 24th March. We have a stable, interactive feed, with instructor-student interaction just as we would in our regular sessions.

Let’s not forget the importance of looking after one’s mental health in these challenging times. Enjoy the fresh air and sunshine of the beautiful spring weather to exercise, whilst maintaining a safe distance from others. And indoors, follow the sessions, watch the details, check the technique and practise safely.

Keep up to date

Feel free to reach out via the contact form. Email is still the best method of contact for club members and I will send session weblinks and updates using this method so make sure the club email address is added to your email whitelist, and Follow our Twitter and Facebook accounts @Shiranamikai

[Fully in line with official guidance at the time]

Shiranamikai instructor, Austin Biesty, talks with London-based TV correspondent Alexander Khabarov about the measures adopted by the karate club in the wake of the coronavirus pandemic.

With gyms, schools and halls closing because of concerns about virus transmission by touch and being in close proximity, we moved to hold a contactless class outside, thereby also ensuring good ventilation and distancing by remaining at least two meters apart.

One of the unique benefits of many Japanese martial arts is the ability to practise effectively without contact. Karate training comprises three core elements: Kihon (fundamentals), Kata (set patterns), and Kumite (partner work). Having already dropped the kumite aspect we were able to continue practise whilst adhering to official guidance.

In budo, the overwhelming aim is the development of oneself, and as such, by being able to continue practising alone but with direction, one places a much higher demand upon their own state of mind and physical form than they would do when facing an opponent directly.

Alexander, it was lovely to chat!

And how quickly things change! We had the pleasure of the next morning’s sun together which was to be our last lesson in person before moving all sessions online.

Shiranamikai Karate has been featured in ‪The Sunday Telegraph’s ‘keeping active’ pictorial. Students were pictured practising two meters apart and completely in line with guidance at the time. The caption reads…‬

‪With cafés and attractions shut, in Primrose Hill, London…a martial arts class takes place – making sure they keep their distance from each other‬.

Watching our new club promo together on the small screen at the big screen before it goes live. But how did the popcorn go from being ‘on the club’, to being all over the floor? Never mind, it was a fun thing to do!

Many thanks to all the staff at Odeon Cinema Swiss Cottage for being so welcoming and taking such good care of us. The newly refurbished IMAX screen will open in two weeks time – can’t wait!

And here it for those who couldn’t make it to training on Saturday:

Welcome back to the dojo!

Our Christmas break was shorter this time than on previous years and we had the mid-holiday session too. Even just a few days rest can make it difficult to get going again especially after a sedentary Christmas, but it felt good being back in the dojo!

Maybe you’ve had a few days rest or a few years, or perhaps you are new to martial arts and thinking about trying some karate classes. Whatever your motivation, the main thing to do is get yourself along to whatever it is that catches your interest. Give it a go. The New Year is a great time to start.

And if you do find your way to one of our dojos, you’ll be most welcome. 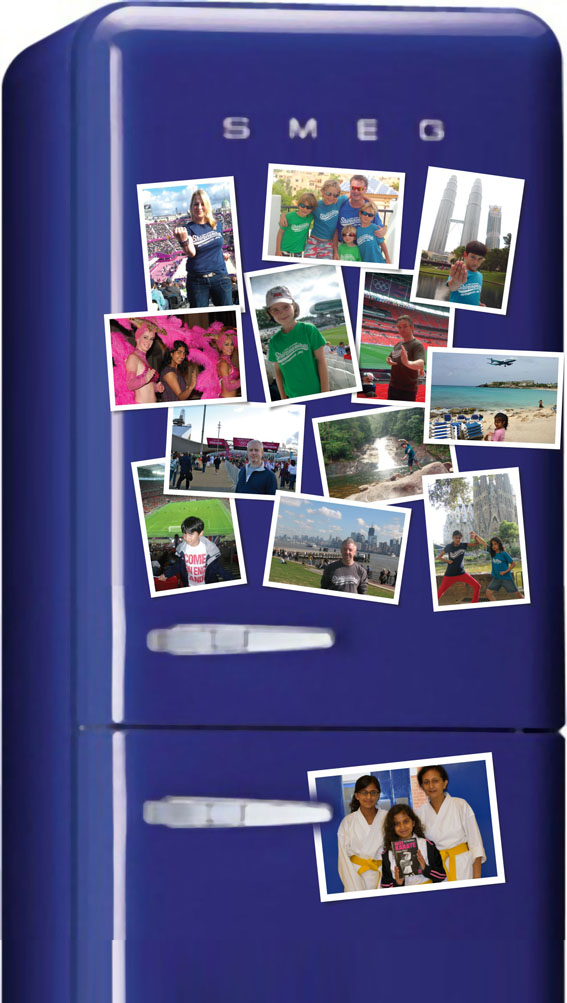 We thought it would be a fun idea for club members to take their club t-shirts away on holiday. And we couldn’t resist the opportunity to gather some holiday photos showing Shiranamikai represented worldwide!

Here are the results. We were so impressed with the submissions that we decided to award a prize to the best entry. So well done to Iman and Sara, photographed against a backdrop of Gaudi’s famous Sagrada Família Cathedral in Barcelona! The Shiranamikai t-shirts are clearly visible and it shows good techniques. Hope you enjoy reading the prize, your very own copy of Masatoshi Nakayama’s Best Karate!

As we come towards the close of London 2012, Shiranamikai karateka look back on an inspiring Olympic games and dazzling displays of power, speed and agility! It’s been nice to see from your tweets that many club members were lucky enough to get tickets to events. If not, then the view from in front of the telly has been great too!

Talking of TV, there was a great BBC documentary about Olympic Champion Usain Bolt a few weeks ago which is well worth a watch (find it here on YouTube). One of the best bits is at about 18 minutes in where we see Bolt in hard training. Panting, sweating and even vomiting.

“Behind the scenes all the work is done” he says, between gasping for air. “A lot of people – they see you run and they say ‘you make it look effortless, you make it look easy’. But it’s day-in day-out sacrifice … just dying. Sometime I wake up thinking: I don’t wanna go today – it’s so hard… but you’ve gotta go.” We all know that talent alone does not make a star performer, but hearing it from the Champ himself really hammers it home! There are no shortcuts – it’s the hours upon hours of hard work and dedication that separate the elite from everyone else.

Away from the sofa and back at the dojo, a query that has cropped up a few times is whether karate will be represented at a future Olympics.  After all, Judo and Taekwondo are represented, so why not karate? It’s a long story, but one of the complications is that there are many different styles of karate, each with different views on governance, technical execution and scoring. And separately, while a lot of folks are not necessarily opposed to the possibility of karate as part of the Olympics, they have concerns that too much emphasis on the sports side of our art could lead to the dilution of its true essence. More on that in a future post!

Interestingly, there is common ground between the ideals of karate and those of the Olympics. Have a look at the three Olympic values, listed below as drawn up Pierre de Coubertin, the founder of the modern Olympic movement. Can you see them echoed closely in the dojo code that we recite at the end of each lesson?

From the photo stream you might recognise Harrow-on-the-Hill as the the Olympic flame passed through a couple of weeks back (very near to our two Harrow dojo) and also my prized collection of Wenlock and Mandeville photos. All the Wenlocks and Mandevilles had quite good kime, which helped them lock into position for a short moment of stillness as I took their pictures. There are 83 of them dotted around London. Hoping to get pics of the full set before they get auctioned off next month!
Sasha

Have you made any new year’s resolutions? Common ones are to get fitter, change your eating habits for the better, spend less, and become more organised. Perhaps you’ve got a resolution that relates specifically to karate. But surveys show that most people’s good intentions will have fallen by the wayside after as little as a few weeks! We stand more chance of success if:

In karate, the kyu grading system provides a means to measure progress. But while the grades are useful and motivating markers, we need to be careful not to confuse them as being equivalent with systematic goal setting. From grade to grade, take care to think about more than just the desired outcome (e.g. “to achieve my green belt by March 2012”). More importantly, consider the performance level that you’ll need to achieve and set intermediate goals and an action plan to reflect this.

For example, a few corresponding goals and actions for someone working towards 6th kyu might include these: increase fluency of my current kata by doing 10 good repetitions each evening; develop a better range of hip rotation by practising 50 rotations from hanmi to shomen in zenkutsu dachi per day; Memorise the feel and angles for correct kiba dachi and practise holding this position for 60 seconds each day.

So what would you like to achieve in karate in 2012? Why not make a plan now and regularly update it as you continue to improve? Whether your ultimate goal is to get to black belt and beyond, to become a JKA World Championship medallist, or simply to get fitter and healthier through regular training, we look forward to seeing continued progress in 2012!

The yearly Japan Matsuri is a central London festival which celebrates traditional Japanese arts and culture. This year, the Matsuri was held in and around County Hall, Westminster. Three different staging areas had been set up for demonstrations including one dedicated to martial arts.

Between time spent queuing for tasty food such as okonomiyaki and yakitori, we managed to catch some kendo, niigata, Goju-Ryu karate (considerably different to our Shotokan style) and judo displays. There was also Taiko drumming to enjoy among a wide variety of other performances.

Because of the distance between the various areas and growing

crowds, we didn’t quite manage to take

in everything we would have liked to see but it was probably for the best that none of us got to exercise our vocal chords at the karaoke competition.*

So, if you didn’t make it, the photos should give a flavour of what you missed.

*But maybe we should do this for our next club outing…

The first installment has Munish learning correct breathing techniques and the principle of applying this to maximum effect in JKA’s signature oi-tsuki. In the second, Naka Sensei shows Munish how to use his hips to block and counter-attack.

If you want to improve there is no substitute for regular training at your club. But as a supplement, books and other kinds of media are great. We might train for years with our instructor telling us time and again to correct something – but reading supporting information or looking at pictures and video can help us absorb information more readily. So why not try the radio?

The tracks played at the end of each episode have been thoughtfully chosen too!

An Introduction to Karate Episode 1

An Introduction to Karate Episode 2