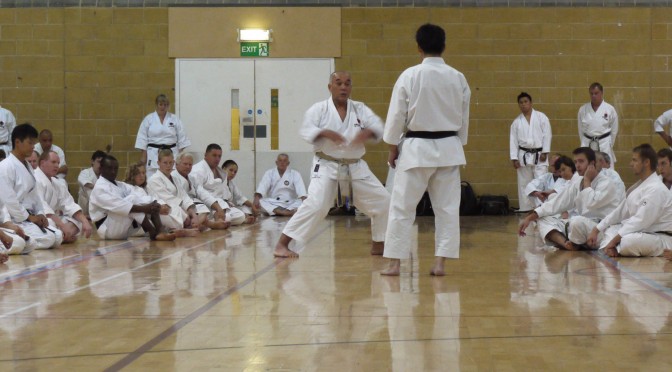 In karate, when we are trying to get things right, we often focus on trying to achieve a perfect final position. This is particularly the case in JKA karate, where there is particular emphasis on attaining correct form. But what is just as important as the end ‘snapshot’, is consideration of how one gets there – i.e. how we make the transition from one posture to the next. With this in mind, one of the themes set for this year’s special JKA England summer course was ‘correct movement’.

Through the various sessions led by our visiting instructors from JKA Headquarters and by Ohta Sensei 7th Dan, we paid particular attention to the different ways in which we could move our bodies efficiently from the start to finish of various techniques. Expansion and contraction of the body, inner thigh tension and balance transfer were some of the concepts we worked on. We also considered the most effective ways of using the ankle, heel and forefoot, including some ‘workarounds’ to use for those with less flexible ankles.

Sensei Ohta explained to the kyu grade students that when trying to learn the correct path to a technique, it can be useful to think of it as composed of multiple frozen pictures from a movie. For example, during Sensei’s earlier studies, while there wan’t much around in the way of karate video, he was able to study ‘cine-camera’ footage that provided a frame by frame view on the movements. Breaking down a technique into a series of well-defined intermediate positions, and blending these together smoothly, can be a useful method of training the body to follow the correct course of movement.

Through polishing our basic techniques we were able to set the groundwork for a better quality of movement in kumite and kata. Kumite drills incorporated adjustment of distance through changes to stance and angle of attack. Kyu grades studied all Heian kata plus Tekki Shodan in depth, and Dan grades worked on Bassai, Kanku, Chinte, Gojushiho Sho, Sochin, Empi and Jion.

A handful of Shiranamikai students joined us on every day of the course, some training for a day’s training and a couple opting for the full three day course. It really pleased us to see club members getting the most out of this opportunity. Regular training at club level is the core of our karate training, but the wealth of knowledge and inspiration gained from these courses will really help you to advance to the next level.

Come and join our karate classes in Swiss Cottage 4pm Saturdays, West Hampstead 6.30pm Tuesdays, Stanmore 10am Sundays, Harrow-on-the-Hill 7pm Wednesdays, while kids age 5+ can now enjoy our NEW class 5pm Thursdays. You don’t need any special equipment to start, just yourself and the lesson fee. Sessions are open to everybody and continue throughout school holidays.