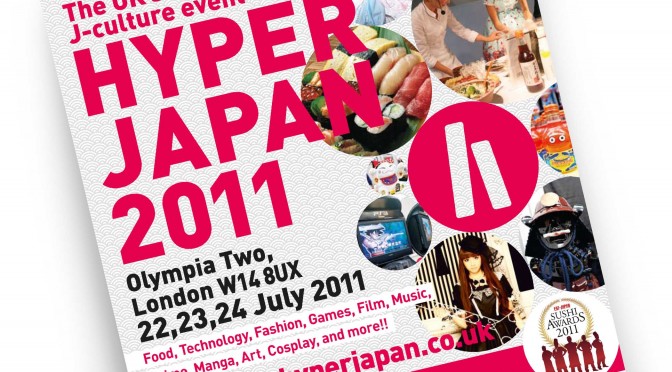 To quote the flier, Hyper Japan was billed as “the UK’s biggest J-Culture event… showcasing everything that’s creative, cute and crazy about Japan today”.

I have been studying karate for some years now which has certainly fuelled my interest into Japan’s fascinating and diverse culture. Events like this give a little flavour of what it’s like to visit Japan and in this case the themes on display were a contrast to Japan’s more traditional offerings.

People arriving at the Hyper Japan 2011 exhibition who hadn’t pre-booked, were being turned away because its popularity went far beyond expectations. Fortunately though, one of our club members without a ticket was able to employ their emerging Jedi mind powers to still get in!

Inside the exhibition, there were lots of shop stalls selling toys, plush character goods, books, DVDs and fashion including the famously frilly Baby, The Stars Shine Bright clothing brand (as featured in cult film Kamikaze Girls, released in Japan as Shimotsuma Monogatari). In fact, there was so much on offer that it was difficult not to get carried away, like I did with the Nano Block stand.

As well as the fun stuff, there was also consideration for the earthquake and tsunami stricken Tohoku region of Japan. There was fundraising, a photo exhibition, written accounts from those who have been directly affected by the disaster and a large white sheet for attendees to draw and write messages of encouragement.

The food court was very popular with its reasonably priced bento, hot noodles, tempura and traditional sweets and cakes – yum! Alongside this was the Eat Japan Sushi Awards 2011 final with tasting session and voting. Yakult were nearby too with lots of free samples (thanks Yakult!).

So what else…? Well, there was a J-Pop dance troupe, an interesting aikido demonstration (interrupted a few times by shenanigans inside the Maid Café), a technology showcase featuring a fully articulated robotic hand, a duet of Tsugaru shamisen and electric violin where the two instruments worked surprisingly well together, drawing a large crowd. The console games area featured Nintendo, Bandai-Namco and Konami offering hands-on demonstrations and product launches.

The last place we visited was the Maid Café. It’s difficult to explain in context outside of Otaku (nerd) culture in Japan (and many people would find it just plain weird). But essentially, on visiting a Maid Café you are welcomed and treated (light-heartedly) as if you were a lord or lady in your own home! Simple food is served quickly and comes with handwritten messages or cute drawings in caramel sauce. For a few extra pounds, your maid or butler will even play a few silly games with you and if you win, you get to have your photo taken with the maid or butler as a prize!

If all this looks interesting, you don’t have to wait until Hyper Japan 2012 because our next outing is coming up very soon.