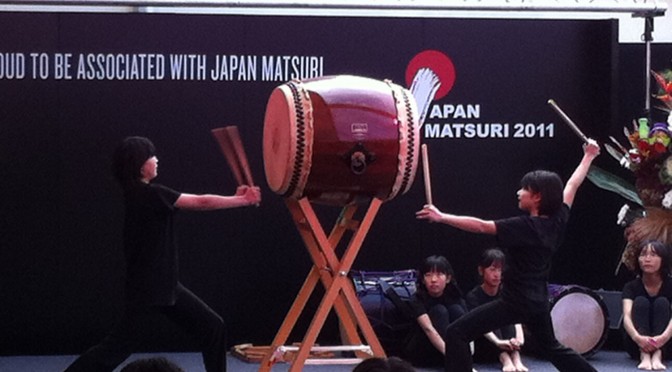 The yearly Japan Matsuri is a central London festival which celebrates traditional Japanese arts and culture. This year, the Matsuri was held in and around County Hall, Westminster. Three different staging areas had been set up for demonstrations including one dedicated to martial arts.

Between time spent queuing for tasty food such as okonomiyaki and yakitori, we managed to catch some kendo, niigata, Goju-Ryu karate (considerably different to our Shotokan style) and judo displays. There was also Taiko drumming to enjoy among a wide variety of other performances.

Because of the distance between the various areas and growing

crowds, we didn’t quite manage to take

in everything we would have liked to see but it was probably for the best that none of us got to exercise our vocal chords at the karaoke competition.*

So, if you didn’t make it, the photos should give a flavour of what you missed.

*But maybe we should do this for our next club outing…