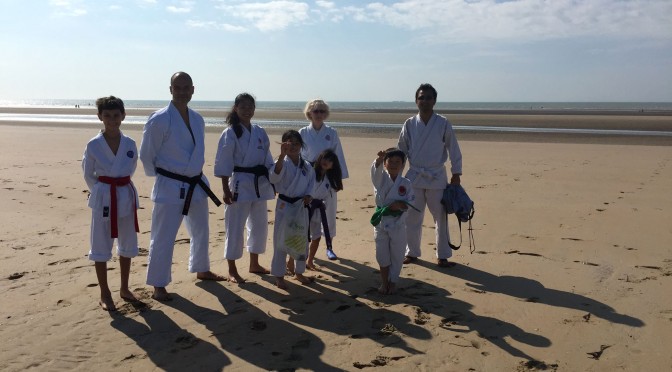 For three days on the Thursday, Friday and Saturday preceeding the August Bank Holiday weekend, Shiranamikai held its first beach gasshuku (or ‘Shelanamikai’ as it became affectionately known) at Camber Sands, Sussex.

At the start of each session we had a gentle jog along the beach to help us warm up. Thursday and Friday we had the place pretty much to ourselves but on Saturday morning, the amazing weather brought everybody flocking to the beach. Fortunately the coastline at Camber is vast and has a gentle incline so there was still plenty of space to train on one of the many banks of sand closer to the sea. Nobody kicked sand in our faces. But they didn’t need to anyway as we seemed quite adept at doing it to ourselves. (Have you ever tried doing mae geri on a sandy beach?)

We had a total of four chilled training sessions, during which we practised Heians Shodan, Nidan and Godan, Kanku Dai, Empi and Sochin. The evenings too were enjoyable with a great bunch; back at the cottage, dinner included delicious takoyaki, courtesy of Sonoko and Miyuki and a tasty barbecue with lots of fruit and veg. With Camber being just over two-hours’ drive from London, we’ll definitely be doing it again next year!

Once training had finished on Saturday, there was just enough time for a splash around in the sea before a quick change, bite to eat, and shooting back to Swiss Cottage for our afternoon session.

Back at the dojo, it was the last* club session of the year for Sonoko, Anju and Yuma until they return next summer. We all wish them our very best and hope that they enjoy training in Japan.

*Nearly the last as they were back on Sunday morning… then trained on Monday evening too! See you soon, ladies!